Out of the Blue, Susan Aldworth 2020. Photograph by Peter Abrahams

Hatton Gallery. Newcastle 18 January – 9 May 2020 (Out of the Blue installation)

Illuminating the Self exhibition is the culmination of a two year collaboration between the Newcastle University-led CANDO research project for which I have made a 3 part installation Out of the Blue.

The first part at Hatton Gallery, is an installation of 100 items of Victorian Underwear – chemises, nightdresses, bloomers -embroidered with the words of people living with epilepsy, suspended from the gallery ceiling in a single block of one hundred, lit by natural and ultraviolet light. The garments move on pulleys programmed by computers to correspond to the algorithms of electrical activity in an epileptic brain. This represents the 1 in 100 people living with the condition.

The second part is a limited edition Artist’s book (15 copies) which contains the full text of the testimonies alongside 64 photographs by Peter Abrahams of the embroidered garments. This can be purchased from Hatton Gallery shop or TAG Fine Art, London.

The third part, at Vane, is an installation of 18 large scale cyanotypes printed on fine Japanese paper. Cyanotypes are made using ultraviolet light, a process which mirrors the use of light in the optogenetic therapies being developed by the scientists. These prints explore, through pattern, the synchronization that occurs in the brain during an epileptic seizure.

At Vane, I am also showing a set of large-scale monotype portraits of 3 people living with epilepsy which were first shown at the National Portrait Gallery in 2013 as The Portrait Anatomised. 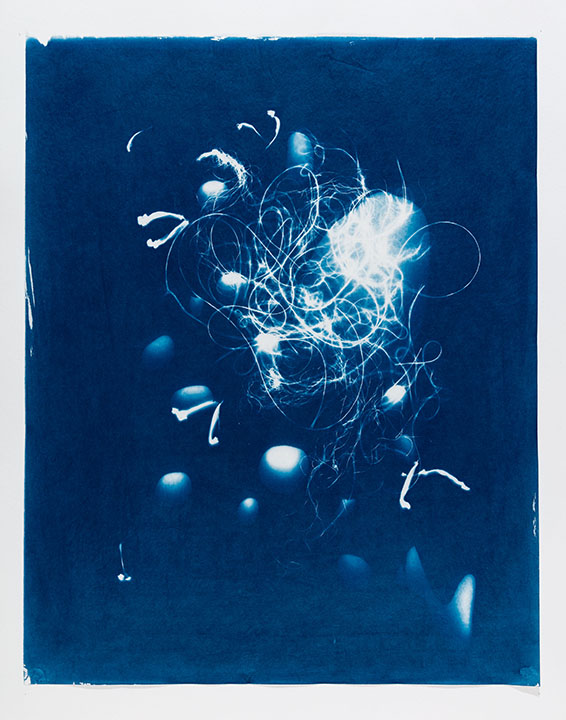