Susan Aldworth (born 1955) has a background in philosophy, and a strong interest in investigating the workings of the human mind, especially consciousness and our sense of self. Her work on the relationship between the physical brain and our sense of identity has linked her with the Art & Science movement in the UK since the late 1990s, and she is an associate lecturer on the MA Art & Science at Central St Martins. Her work is held in many public and private collections including the V&A, the British Museum, The Fitzwilliam Museum, the British Library and The Wellcome Collection Library in the UK, and Williams College Museum of Art in the USA. Aldworth has exhibited widely both nationally and internationally. Aldworth is represented by TAG Fine Art, and is a regular presenter on BBC Radio 3 and 4.

Aldworth is also interested in the lived experience, and her experimental work in print, drawing, installation and time-based  media interrogates the personal, medical, medicated, scientific and philosophical narratives on which we build our notions of self. She worked with the Parkinson’s Society Brain Bank to make a unique suite of etchings – Transience 1-7 – printed directly from human brain tissue which were shown in Realisation at the Fitzwilliam Museum in 2017. These highly experimental prints form part of the Fitzwilliam Museum Print Collection in Cambridge and were funded by the Arts Council England (ACE). In 2012 she was funded by ACE to work with legendary master printer Stanley Jones at the Curwen Studio to make a suite lithographs which explored the lived experience of schizophrenia. They were shown in 2012 at Hatton Gallery in Newcastle alongside her acclaimed short film Going Native in her solo exhibition Reassembling the Self. The V&A have a number of these lithographs in their print collection.

Working as an artist-in-residence in a medical or academic setting is central to her practice, giving her access to scientists, patients and health professionals as well as philosophers and art historians. An artist working in such settings can offer a non medical ear to both patients and staff. Aldworth’s research into the lived experience of epilepsy made her challenge what a portrait might show. Her 2.5 metre high portraits of 3 people living with epilepsy made from 9 monotypes tiled together brought together their personal and medical selves. They were shown at the National Portrait Gallery, London in 2013 in the solo display Susan Aldworth: The Portrait Anatomised, and funded by Guy’s and St Thomas’ Charity.

Sleep fascinates Aldworth. She held dual residencies at York University, and The Sleep Disorders Centre at Guy’s Hospital between 2016-2019.  We spend 1/3 of our lives asleep, and yet no-one can fully account for what sleep is. Using the indent left in the pillow by the sleeper as a metaphor for sleep, Aldworth produced a body of work for her acclaimed exhibition The Dark Self at York St Mary’s in 2017. She was commissioned by Guy’s and St Thomas’ Charity in 2019 to make a body of work on the theme of sleep for the Sleep Disorder Centre at Guy’s Hospital  including a suite of intaglio prints called Respondences.

Her most recent work on epilepsy, funded by Wellcome Trust, continues her investigations into the lived experience of the condition. In Out of the Blue , a monumental kinetic installation shown at Hatton Galley, Newcastle in 2020, 100 pieces of Victorian underwear  – chemises, nightdresses, bloomers – embroidered with the testimonies of people living with epilepsy, move on pulleys programmed by computers to correspond to the algorithms of electrical activity in an epileptic brain. In order to archive these remarkable testimonies, Aldworth was awarded an ACE grant to fund her Artist’s Book Out of the Blue.

Illuminating the Self, Hatton Gallery and Vane, Newcastle

There, where we promenade, Freelands Foundation, London

Other significant recent exhibitions include:

The Dark Self , York St Mary’s

Realisation,  The Fitzwilliam Museum in Cambridge

Reassembling the Self, Hatton Gallery, Newcastle

Landscapes of the Mind, Williams College Museum of Art, USA 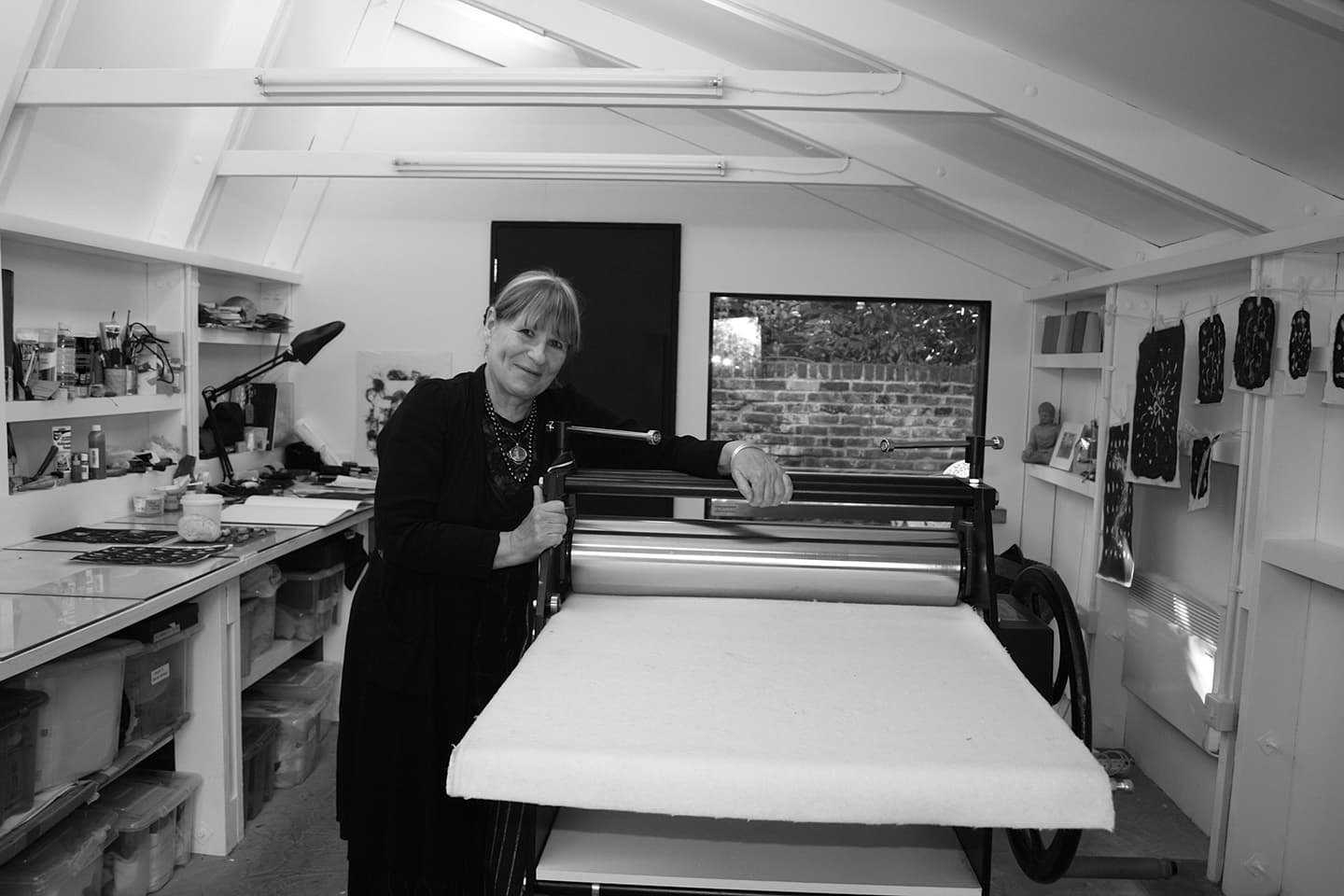 Susan Aldworth in her studio. Photograph by Louise Crawford.